Whereas the prices of more than a few our main raw materials nosedived early in 2020 following the outbreak of the corona pandemic, cereals and soy did not respond in a similar fashion. 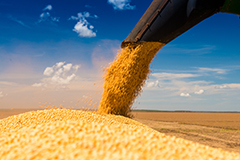 Tropical oils was the first to quickly backtrack on its bullish sentiment early 2020 and was shortly followed by the dairy products; predominantly WPC35 and skimmed milk powder. Instead, prices for cereal and soy managed to pretty much keep their value in Northwest Europe all the way throughout the summer.

However, it was just after summer certain elements came together, or closely followed each other, that had a serious bullish effect on the markets, be it European or global. A Chinese desire for products like soy and maize that seemed insatiable. There were worries about the weather in the Black Sea area. We saw an influx of fund money into agri commodities. Meanwhile La Nina is causing havoc in various parts of the world.Physical markets at some points in time were very tight while simultaneously big consumption is relatively short covered. As a result, cereal prices in Europe increased by at least EUR20pmt over the last quarter and soy by an even far greater number. Wheat on the MATIF is noted at the EUR210pmt mark. A level that we haven’t seen in recent years.

As to the future, there appear to be more bullish than bearish arguments. China is likely to continue its appetite for raw materials whilst concerns for upcoming crops remain. It will be at least until after summer 2021 that we will see firm pricing with buyers stepping in on the dips in the market.